As a member of a discussion group I received two spam email messages, and two corresponding spam posts appeared in the forum. They were advertising some online pharmacy.

So, I cast a chart asking to explaining how this was happening.

How was the spam getting into the forum? I knew it came through one of the members as his name was visible as the sender of the spam messages, so the question is about him specifically; he is L7. 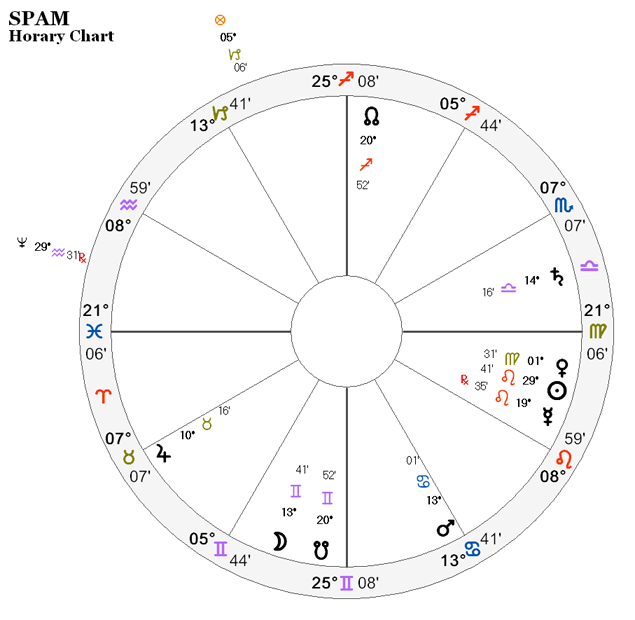 Mercury is the natural ruler of keys. It is peregrine, retrograde and under the sun beams. It is malfunctioning and at the mercy of external forces.

Saturn, the natural ruler of doors and sits affecting his house: 7. Since the key is not working, Saturn is an unlocked?door in his house. Saturn also signifies a vault where data such as passwords are stored.

Can anybody walk into an open door in our house? Yes, specially thieves or pranksters, or anything in between such as less scrupulous businesspeople.

Here we have Mars the natural ruler of virii and attacks in a close square with Saturn. We have our less scrupulous businessperson manifesting in the form of a spam/virus.

And we have the Moon in a close trine with that same Saturn.?The Moon, also peregrine, rules the house where the virus is acting from, that is: his friends’ (turned 11th). The Moon (his friends) is in turn disposited by the same mal-functioning Mercury. His friends also?have malfunctioning keys and therefore open doors in their houses/computers and those open doors are linked.

Mercury is conjunct Jupiter by antiscion and Mars is separating from Jupiter. Jupiter rules the 3rd house from the 7th: his Internet connection. We have the picture of the spreading of a computer spam/virus via the Internet.

Mercury is ruled by the quesited’s L12. Maybe he neglected his computer security, maybe he doesn’t know about it, maybe his antivirus program expired, whatever. The fact is that something that he did do or did not do caused a problem to himself, and to everybody else connected to him. The Sun opposing Neptune leads me to think he was not aware of the problem at all, rather than negligence.

The spam/virus messages were advertisements for an illegal online pharmacy. Here we have the spam signified by Mars in triplicity and fall, that is: both dignified and debilitated at the same time. They are selling a useful thing, but in dubious ways.

We are lucky that Mars in triplicity and fall went into his door; there was no real damage. Mars in detriment would probably have been a different story…

PrevSaturn, Mars and Free-Will
The Health of a Nation and its People – (observations)Next