Querent reads the news and people keep talking about the USA government becoming a dictatorship.

QUESTION
Is our democracy eroding towards dictatorship? Are we going to lose more and more civil rights. 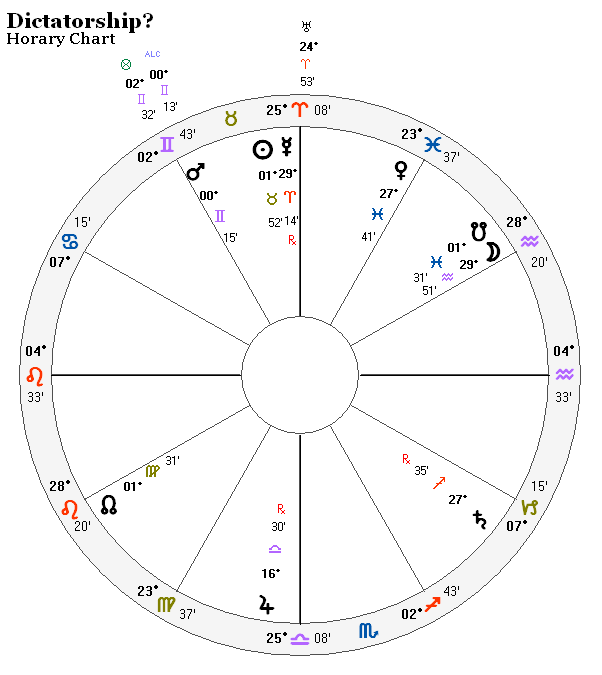 SIGNIFICATORS
Presidential power: Mars (this includes the presidential inner circle, or what is referred to as: “White House”)
Aides to the presidential power: Mercury (this includes the totality of the function of all the branches of the government but most importantly it represents the elected officials who, in theory, represent the people.)
The opposition: Venus
The country: the Sun
The country’s resources: the Sun
The people of the country: the Moon

INTERPRETATION
The Sun has just left its exaltation. It has lost its essential dignity. In summary, we are going down in several possible ways. And just to be sure, this has been going on for decades, so it is not about Trump per se. However, this chart serves to show that he is not changing anything in our favor.

Uranus is on the 10th cusp hinting at some kind of rupture for the government. It is a desirable rupture, such as a breakup between corporations and the state? Or church and the state? Or the military and the state? There are indications of the opposite. So let’s wait and see what will break up exactly.

The Sun’s antiscion is on the 2nd cusp. That is like a signpost. Look here: house 2.

Mars has left its detriment and entered the sign of Mercury. By that it has landed on Alcyone.

Alcyone is about disappointment; for the government or about the government, I am not sure. More likely both. Let’s see?how the Weeping Sisters act plays out.

Mercury retrograde has entered the Sun’s exaltation. It is right inside the 10th cusp and in mutual reception with Mars and conjunct the North Node by antiscion.

Mercury has a lot of power as is obvious by the context: the senate and house are controlled by one party. They have all the power they could wish for. The antiscion hints at some of this power being out of anybody’s sight which, if you have done your homework, know is true. The fact that this conjunction takes place on the star Regulus and near the 2nd cusp is rather suggestive. The 2nd house is your money my dear fellow American; your resources, the resources of your country.

Mercury is about to trine Saturn with negative mutual reception. The only image that comes to mind is some resistance being put up against Mercury’s path. I would feel better if Saturn were angular. Here it will be steamrolled by Mercury. But the effects may?be significant enough. I’ll close this article with some extra thoughts on this below.

The three branches are largely in agreement as to policies to be implemented. Mars has decided to play Mercury’s game and Mercury has decide to play Mars’ game. They both have power in each other’s houses. This is quite a remarkable testimony of how things work in Washington. Most notably in the fact that executive orders don’t just go into force without approval from L11, with some absurd exceptions such as invading other countries.

The Moon and Mercury are deeply mutually influencing by a close sextile as it is natural for the people to be connected to their representatives.

However both Mars and Mercury have left the Moon’s dignity behind. The Moon is no longer a priority. That is perhaps the most important testimony in the chart; along with what happens to the Moon next.

Doesn’t it say somewhere that this is a government by and for the people?

This chart shows that with the new presidency that ideal of a government by the people and for the people is sternly not viable. Mercury and Mars in the chart are saying to the people: “we no longer elevate you”.

In real life however, those two under a Mercurial spell are saying: “we do love you people!” While their actions, like good old Mercury, demonstrate something completely different and opposite. That is shown by the simultaneous sharp change in receptions in the chart, and by the blatant lies told in real life.

Although the theory is that there is no combustion across sign barriers, this is the third chart I have seen this month where combustion makes total sense. Or we can simply read the combustion in Taurus, just before Mercury entered Aries, as being the “cause” of its shift of receptions. ?Mercury is blinded by the shining of the Sun’s gold; for this country is gold in literal as wel as metaphorical senses. It is blinded by that which it exalts. Who would not love to ride the pinnacle of power in this country and reap the benefits? Never mind the cost? and karma incurred. Blinded indeed. Personally, I would not want to ride that power, but there are plenty of young power-hungry greedy souls who certainly do.

By the way, Alcyone is also about blindness. Mercury and Mars are blinded. Who would fight to remove medical care from millions in order to give tax credits to billionaires if not by being blinded to the cruelty that that implies. Total lack of conscience and empathy. Emotional blindness.

The Moon will enter Venus’s exaltation. This is a congruent picture with a significant number of those who elected Trump leaning towards or going “to the other site” and feeling divided as they will also enter Mars’ triplicity. How long will it take for it to dawn on people that Trump cannot deliver on all his Mercurial demagogy? Actually it is already happening to some; to others likely not any time soon.

The Moon will leave Aquarius and immediately square Mars and land on the South Node. Part of the phrasing of the question was about loss of civil liberties. What does the South Node do? It shrinks and limits. Whatever touches it loses something. This is happening on a square with the president. The immigrant detention centers in the USA are one example of this manifesting.

Venus, the opposition, is in no dignities of the Moon or the Sun. Venus is exalted. Venus cares a lot for itself, which is understandable: they are in survival mode after losing the presidency house and senate majorities. On top of that it is in Mars’ triplicity. Either there is agreement between Mars and Venus or the president has a measure of power over them. Possibly both.

I think we have the picture of a mess. A mess that has by no means been started by Trump but he sure is providing some golden nails to the coffin that were unseen in American history.

While it is not possible to produce an absolute answer as to becoming a full blown dictatorship the charts offers clear testimonies for the loss of civil rights and loss of other benefits; the people will be squeezed further. Name that diseased condition as you please. How far we will go down this path is anybody’s guess.

There is one positive testimony in this chart.

Mercury is going to turn direct and enter the exaltation of the Moon in Taurus again, where it also is in the detriment of Mars. That is, a significant part of the government will turn against Mars’ and will work for the people again. It will be interesting to see if that takes the form of an impeachment process. But that will come later, after some harm has been done. A little light at the end of the tunnel perhaps…