Recently I had the opportunity to discuss a horary interpretation with a fellow astrologer. The question was: “will I meet someone (a love partner) next month?” 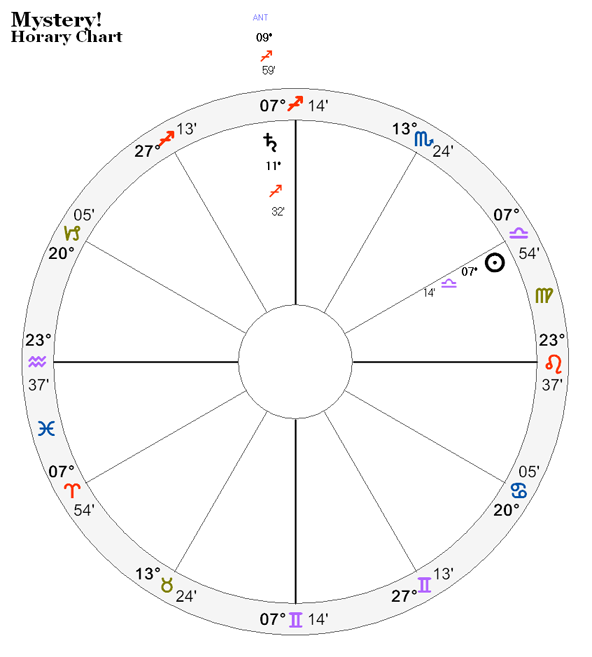 Aquarius rises. The chart shows L1 (Saturn) in Sagittarius, angular in house 10. The Sun (L7) is in Libra in house 8 applying to sextile Saturn with no impediments. The Sun is in Saturn’s exaltation and Saturn is in the Sun’s triplicity.

This configuration is enough to judge “yes” to such a question. My answer was: “it is quite possible that you will meet someone.”

After some back and forth conversation with the astrologer/querent I could tell.

What can we tell from the significators?

The Sun is accidentally debilitated. Saturn is accidentally dignified. If someone can act to look for a partner it is Saturn, the querent. The Sun in house 8 indicates that the “love partner” will not come knocking on her door. So, unless Saturn is active in pursuit there cannot be a positive outcome.

After November passed and no one appeared I asked the querent: what did you do to find a partner? Did you go out to a public place? Did you go on dating web sites?

She answered: “I did nothing, I just waited for him to appear.”

Well, that solves the mystery. The chart shows you could meet someone but you would have to do something about it. You did nothing thus you did not meet anyone. Period.

Now notice the nuance the chart gives to the outcome: Saturn is on the star Antares. That is: nothing will start for Saturn in the context.

That solves the mystery and I got a lesson.

I assumed: “if she is asking she must be actively looking!” And so I judged “yes”.

Mistake. A horary astrologer should not assume anything. Make sure you understand the context correctly or else you will give the wrong answer; which is what happened here.

The context was: “an inactive querent” looking for a partner. Antares was a flag, but I disregarded it. Mistake too.

“Oh, but the Sun is the applying planet and being in its fall and in house 8 means that it will not produce a positive outcome.”

The Sun will surely not produce anything. But Saturn could produce a positive outcome. It does not matter which planet is applying to which. Who can act is given by accidental dignity and the context.

The problem here is that the querent is in imagination and is asking an unfounded horary. This is not Hollywood or Jane Austen. The chances that a frog will turn into a prince in front of you out of nowhere are extremely rare. If you want something, do something, then ask a horary. This is like people asking: “will I win the lottery?” But they never got or intended to get a lottery ticket.

So, the answer is: you may meet someone, but you have to do something about it or else you will not.