What could cause a population decrease?

Now let’s look at the chart for any possible corroborations. It will tell us. 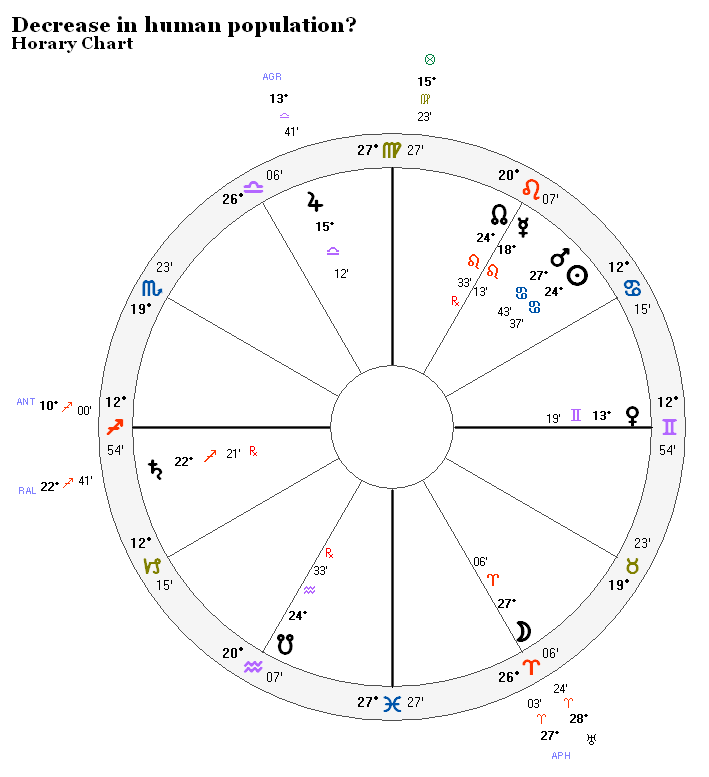 Jupiter is “us”: humanity.

Any testimonies for “decline” or “reduction” or “shrinking” for us? Such as the South Node or Saturn in a prominent place?

Yes, Saturn in is house 1: “we” are shrinking. Barring opposite testimonies elsewhere in the chart, the question is answered by Saturn alone.

Venus, L6, is angular in the descendant and applying to trine Jupiter with negative reception. So, Venus is coming to harm Jupiter. Jupiter is under Venus’ disposition. This is triple-testimony of an overwhelming negative force against Jupiter.

The offending planet (negative reception) has power to act and has power over Jupiter (disposition) and it will take place without any resistance (trine).

After that Mercury takes the light of Jupiter to Saturn.

What is the primary factor, or entity, which establishes population increase by its presence, or decrease by its absence?

So, since the Moon is so aptly placed it does not hurt to see how babies are doing in this chart.

The Moon squares L5, Mars, who is combust and being applied to by the Sun. The Moon as well as the 5th cusp are on Uranus. Antares is on the ascendant. The Moon is radical L8. Both are under the power of the Sun. If we wanted to find a testimony for contraception, sterilization or some other form of anti-baby condition that would do.

So, there is a decrease indicated. How or to what extent we cannot tell, since L6 can encompass all kinds of “external” afflictions, including an epidemic or accidents or a natural disaster. Plus, Mercury will have an influence next.

When the querent heard the answer she asked: when?

We really have no idea how sudden or how gradual this may happen, but we do have an indication of a significant initial trigger in Venus’ trining Jupiter; so the first significant event will take place in about two time units.

What are the possible time units?

To my mind they are years, decades and centuries.

Venus is mutable and angular. Two decades, with some delay from the mutable sign.

We may see the first significant hit against the population in about 20+ years (from 2017). Further restriction taking place in around 40 years; shown by the Mercury ToL. (For details on timing technique read John Frawley.)

Well, what if the time units are months, years and decades? We had the onset of the Covid 19 pandemic in 2019 — Venus. Two time units. Forget about 20 years. It was two years.

Also, what do we know about mRna vaccines now? Not from the mainstream media, of course. I’ll let you do your homework…

Mercury is L10 and squares the 6th cusp (and 12th). Mars sextiles the 10th cusp and trines the 4th linking babies with the vaccine as well as congenital factors (DNA).

Fortuna hints at the essence of what is happening in this chart. House 10.

Covid 19 and vaccines may well be the beginning of the process indicated by this chart. This is bad. I have other charts on the subject, they all show the same story.

PrevTo What House Does a Funeral Belong to?
Medical Astrology Diagnosis – Birth TemperamentNext