Robin Williams’ Cause of Death

Question: was it really a suicide? 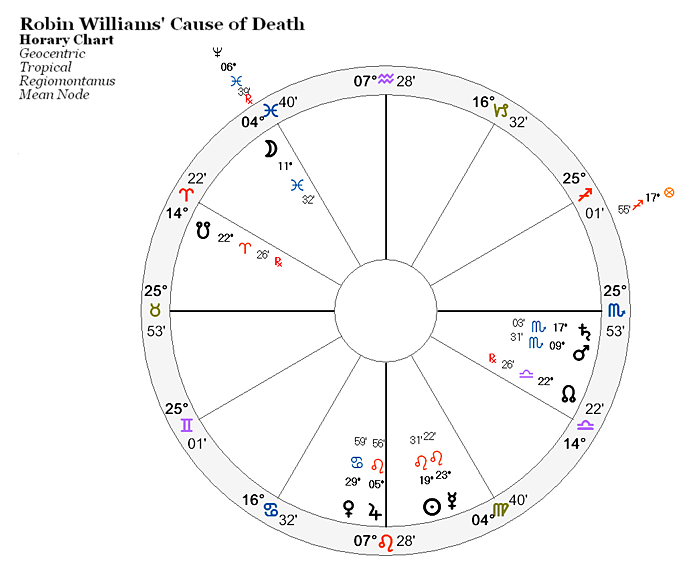 RW is not directly related to the querent therefore he is L7, Mars.

What does Mercury tell us about the death?

On its own it links death with one of the natural significators of the lungs. Mercury also translated light from Jupiter to Mars, so two natural rulers of lungs. More significantly, Jupiter is the accidental ruler of RW’s neck in this chart, L2. Since the news mentioned asphyxiation by hanging I believe this is appropriate.

But that is far from being the end of the story.

Mercury is in Leo therefore under the power of the Sun; not only by disposition but also by being near the Sun at the time of this inquiry, so combust.

What is the Sun? The Sun rules his house 10 (turned) of medication. That is: his death was “ruled by” his medication and is also masked or hidden by medication (combustion). That is plausible, if he was being treated for some medical condition. This could point at the medication being the underlying cause of death, yet it may be that this will not be seen or acknowledged, at least, perhaps, until Mercury leaves combustion (literally or symbolically). The fact that Mars’ antiscion sits opposite the Sun (and Mercury) further establishes the turned house 10 role in the event, while the antiscion hints at things obscure or unseen, a theme that is echoed three more times elsewhere in the chart.

Let’s look at Mars next. What does it tell us?

It is in house 12, the house of self-harm. We have an indication that he possibly acted against himself in some way. But the fact that the turned 12th ruler, Venus, is not active in this chart, and the fact that Mars is not under Venus’ rulership, makes me doubt that this was a “plain” suicide.

It is said that RW suffered from depression. But why is Mars in Scorpio then? In his own sign?

A planet in its own sign is an apt symbol in certain types of depression. A central point in deep depression is a deep identification with self at the exclusion of all else, whatever we believe that unhappy self to be, and whatever form that may take for diferent people. So, a planet in its own sign in its own house 12 it a clear symbol for someone profoundly depressed and unhappy. That Mars is in a water sign hints at the fact that the subject of his depression had a deep emotional content, as in inner emotional turmoil; as opposed, for example, to Venus in Taurus, or Mercury in Virgo, showing a depressed person who is rather melancholic. In RW’s case it appears that there was a lot of movement going on in his inner world as opposed to a depression based on a melancholic inclination to cease movement.

What does an unhappy/depressed person ultimately want?

The same as all of us: to be happy! How we pursue happiness can lead us in all sorts of directions though, some of which may actually lead us even more deeply into unhappiness, unfortunately. Or death by suicide, since the physical plane is judged to be ultimately unsatisfactory. Pleasure and the permanent release from psychological suffering (true happiness, if we will) are two different phenomena. Seeking pleasure to quell deeply ingrained unhappiness is an all too common human endeavor.

This leads us to the the Moon, who has just separated from a trine with Mars, putting his house 5 and its ruler, Jupiter (again), on the spotlight. Jupiter is angular, therefore strongly active in the drama; it is also ruled by the Sun and is on the turned house 10 cusp – very prominent. And again, the theme of unseen/obscure afflicting forces: Jupiter’s antiscion sits opposite the 7th cusp. We have a picture of painkillers, anti-depressants, mood-fixers, mind-fixers or stimulants of some kind having played a significant role in his death. The Moon, being the natural ruler of narcotics is close to the cusp in his 12th house by antiscion in strong mutual reception with Venus, possibly translating as: unseen self-harm by narcotics. Neptune on the turned 5th cusp again emphasizes something obscure about his house 5 regarding the event.

I find it remarkable that Mercury actually translated light from Jupiter (turned L5) to Mars, that is: death, in the end, as unbearble to contemplate it as it may be, in an awkward way, as is often the case with square aspects, soothed his pain in the end.

Obviously this is one interpretation. The detailed truth we will likely never know. But this chart gives us hints that things are not black and white and there is more to the picture than is normally seen in the news.

I wish Robin Williams some rest after such a long and apparently difficult journey, and that he finds his innate Happiness now and always.

PrevWill Michael Schumacher recover?
Will there be a major ebola epidemic in the USA?Next