Is my insulin working?

The querent is type 1 diabetic, therefore insulin dependent. Recently her glucose level readings have gone significantly up. She has not changed her diet or lifestyle. She is wondering whether her short-acting insulin has gone bad and has stopped working or whether her pancreas, which still produces a minimal amount of insulin, has worsened. 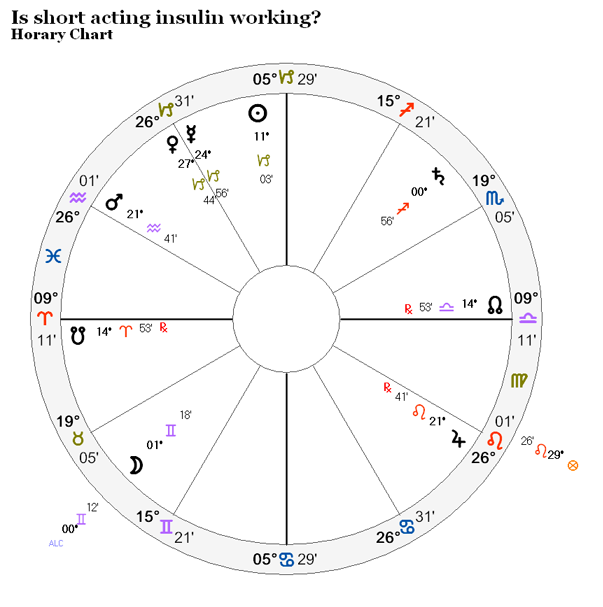 The querent is Mars, L1. Insulin is a treatment, so L10, Saturn. The natural ruler of the pancreas is Venus.

First let’s see if the pancreas’ condition has worsened. Venus is in its triplicity and has not lost any dignity or suffered negative aspects recently therefore we judge that the pancreas has not worsened.

Since Saturn is the treatment and is conjunct Venus by antiscion it describes the obvious: insulin and pancreas are mutually affecting. In fact, the pancreas is “helping” the insulin since Saturn is peregrine receiving the reception by sign from a dignified Venus. Conversely we can say that Saturn therefore is “draining” Venus.

>>> Venus in triplicity must mean the pancreas is in good shape, right?

No. The pancreas’ condition is given by the context and its absolute condition is not the focus of the question.

Let’s look at the treatment then.

Saturn is at zero degree of Sagittarius. What does that tell us?

That is has changed recently. Is that change good or bad for the querent?

In order to answer that we must look at receptions.

In Scorpio Saturn was in Mars’ sign therefore well disposed towards Mars. Translation: insulin helped the querent. By changing signs that reception got lost. Saturn is indifferent to Mars in early Sagittarius. That is, insulin no longer helps querent.

But there is more, confirming the judgement and describing the situation.

The South Node is in house 1 indicating an undesirable outcome pertaining the context.

The Moon, the queren’t co-significator is separating from an opposition with Saturn. That indicates a split from the insulin, that is: she has in practical terms used this particular batch one last time and will not use it again. The Moon being on the Star Alcyone echoes the South Node in house 1.

Mars is in exact opposition with a retrograde Jupiter, the natural ruler of blood, on the houses 6 – 12 axis. This shows the blood is malfunctioning (retrograde) and sick/weak (house 6), that is: there is too much glucose in the blood. Mars in house 12 shows the querent is doing something against herself, that is: injecting bad insulin, given the context.

Finally, the querent remembers that she took a long 12-hour drive in the California sun and had her insulin pens in a cool box, but likely the insulin got too warm and eventually lost its power. This indeed is well portrayed in the chart showing the insulin going bad by L10 moving from a cold sign into a hot sign.

She bought new insulin and her glucose levels went back to normal.

PrevWill there be a major ebola epidemic in the USA?
Why is a treatment shown by house 10?Next