The querent's friend is suffering from acute pain in the lower back. What is going on? 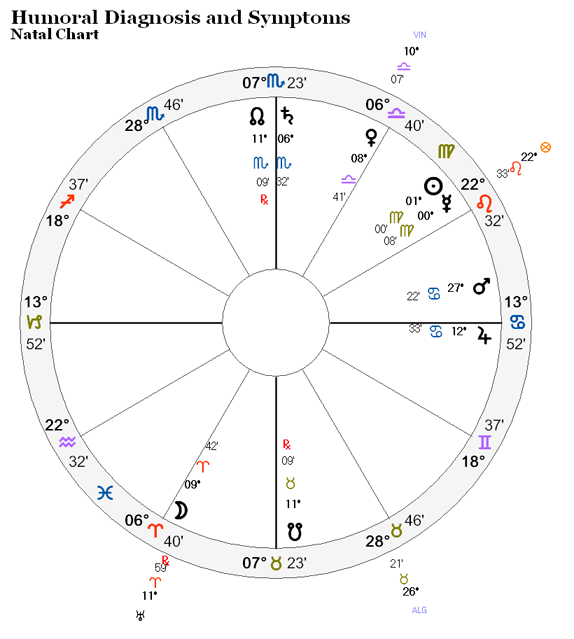 The friend is L11, Mars, located in Cancer. A hot-dry planet in a cold and moist sign; it is out of sorts. Mars’ dispositor, the Moon is the cause of his problems. The Moon in Aries shows the quesited has an excess of heat and dryness in his system. It should be relatively easily curable by the right measures.

This matches the context perfectly. The quesited recently started working at a welding site where he is exposed to extreme heat many hours per day. He said that for three weeks he was sweating like crazy and did not drink enough water and felt dehydrated.

That’s it for the humoral diagnosis. Now let’s look at the symptoms and then let’s go back for more diagnostic details.

What is this malefic Moon doing? Yes malefic, as in “bad”; it is the cause of the “disease”. It is separating from an opposition with Venus with negative reception as it is in Venus’ detriment. Venus is the accidental significator of his Kidneys, turned L7. We have a clear picture of “passing a kidney stone”. Opposition: contact and subsequent separation. The opposition is separating: the stone has left his kidney already. Notice Algol on the turned 7th cusp confirming affliction to the kidneys, as well as Venus on Vindemiatrx showing an organ being pushed to its limits. Disregard it if you will, but Uranus echoes the opposition and shows that a separation is occurring: a stone is leaving his body.

In the evening of the chart casting he went on to spend a few hours in the emergency room when a kidney stone was confirmed and diagnosed as being caused by severe dehydration. That sure makes sense, but is not the whole story.

What else is harming Mars in this chart?

Jupiter is strongly angular and is in Mars’ triplicity and fall, so it helps Mars but mostly it harms it. What could it be?

When exploring the causes of his stone with healers the notion of diet came to the surface. Could his diet have a part in this? Jupiter is his L2.

Well, common sense tells us that we do not even need a chart to say “yes”; but this is his chart and he needed to see it. He assured me that his diet is wonderful, and I believe him, since Jupiter is in Cancer ? and notice that Mars exalts Jupiter. But the receptions don’t lie. His diet is good but there are things in it that harm him. So, just for fun I asked him what he had eaten on the day before he had to go to the ER. He told me: I can’t eat anything, I feel nausea, so I just ate two pieces of toast! Talk about hot and dry!

Again, this is his chart so it is meant to cast light onto issues he must address. So notice that Mars also rules his 12th house of self-undoing making him “his own enemy”. Mars is in his own triplicity and fall so it harms himself by exalting Jupiter. So he is being told that his wonderful diet was a part of the problem

As it usually is with acute crises the symptoms were over once the stone passed, clearly shown by the Moon in a Cardinal sign.

PrevThe Sweetness of Addiction
Will I get sicker?Next