Will I get sicker?

The querent woke up sneezing on the morning of the first cool night after Summer. This had happened before on cool nights and the sneeze would simply disappear by the end of the day. But this time she had an important appointment and was concerned about getting sick and would rather cancel the appointment as soon as possible if sick.

Question: is this just a passing sneeze or is this the beginning of a cold or flu?

The chart offers an abundance of testimonies. 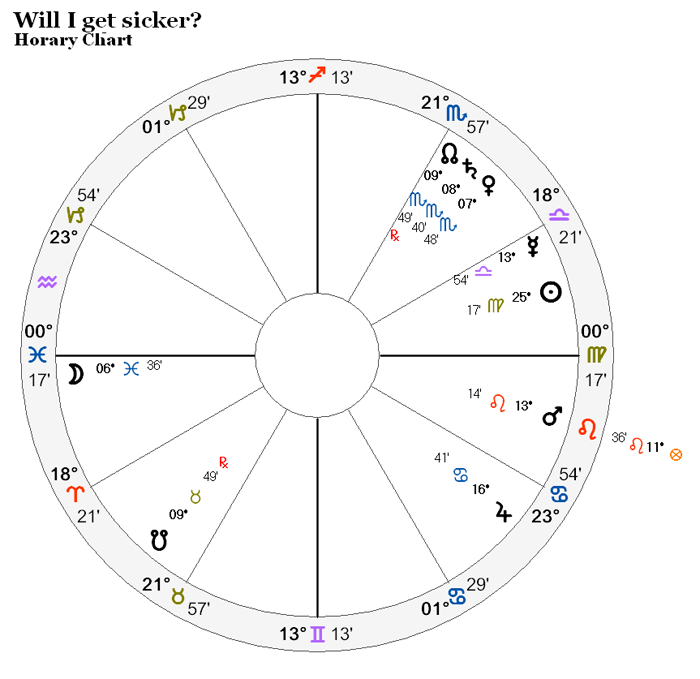 The querent is Jupiter, located in the sign of L6. L6 is in house 1 near the cusp afflicting the querent.

Medical charts always show the symptoms. We are dealing with cold/flu symptoms. Do we have any indicated here?

Mercury, L4, the ruler of her lungs is peregrine in house 8, weak; squaring Jupiter. Mars, the natural ruler of aggressive creatures, such as viruses and bacteria, is peregrine and in a tight sextile with both Mercury and the 4th cusp, afflicting her lungs.

Wrong. Context is key. This is a chart about illness so any planet operating from house 6 which afflicts a relevant house cusp or planet is accidentally strong; it is operating from the “right” house, or its “preferred” house.

PROGNOSIS: Is it just beginning?

Zero degrees ascending. You bet. The Moon is in the beginning of house 1 showing that time will pass while it traverses the whole of house 1, therefore indicates “beginning” as well. Jupiter is less than three degrees from entering house 6 indicating that the worse is still to come.

Further, Mercury, which already afflicts Jupiter by aspect proximity, applies to perfect a square with Jupiter; that is, her lungs, an afflicted Mercury, will cause her further trouble.

But Jupiter is exalted!

That is not enough of a testimony to balance all the negatives; she is sick, that’s about it.

Notice Fortuna conjunct Mars showing the core of the question, which could well be rephrased as: did I get infected by a Virus or Bacterium? Upon hearing the judgement the querent remembered that five days prior she was in close contact with someone who was rather ill and was “coughing his lungs out”, as she put it.

Jupiter is inside the house 4 cusp by antiscion further linking the querent to an issue with her lungs. Not surprising both Jupiter and Mercury are natural rulers of the lungs and alveoli.

The Moon as Jupiter’s dispositor shows a strong excess of moisture and coldness which is right on; she caught, well, a “cold”.

So she got sick, took her turn to “cough her lungs out” and is beginning to feel better.