The querent underwent lab exams which came back showing high blood glucose levels (300+). Her doctor diagnosed her as diabetic type 2 and promptly put her on a Metformin and Glaburyde treatment regimen, the two staple medications to control diabetes type 2.

After a few weeks into the treatment her glucose levels would not come down enough and she was feeling sick. Was it due to the medication side-effects? Or was something else wrong?

She was not comfortable with the casual attitude by the doctor and the fact that she was told she could go on with her normal diet as long as she took the pills. So she decided to do some research on her own instead of leaving her health in the hands of the doctor alone. She learned about the different types of diabetes and realized that she had not been tested properly.

Generally speaking: diabetes type 2 is a system-wide inability of the cells to absorb glucose (insulin resistance); there is no damage to the pancreas. In diabetes type 1 the pancreas is compromised and has lost some or all of its capacity to produce insulin.

She then had the intuition to ask about the integrity of her pancreas, aiming at knowing what type of diabetes she indeed has. 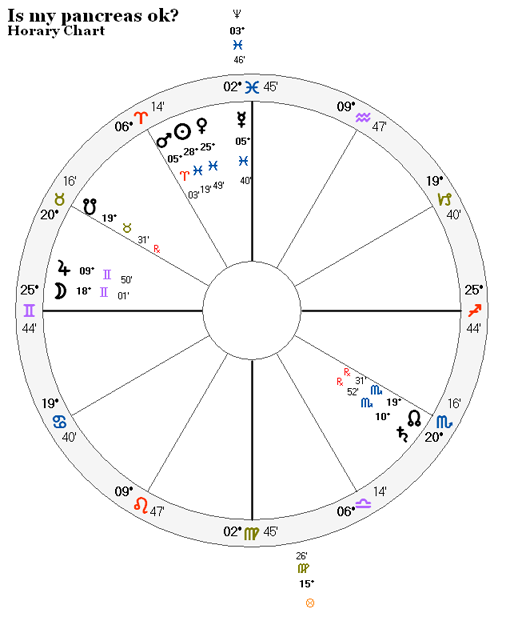 Is my pancreas ok?

The natural ruler of the pancreas is Venus; also the ruler of house 5, the Pancreas. It is combust and exalted, not surprisingly, in Jupiter’s sign, the ruler of blood. Translation: afflicted pancreas and too much sugar in the blood. The pancreas is not OK; we have an indication that she may not be diabetic type 2 after all.

Neptune is conjunct Mercury and the 10th cusp denoting she is not seeing the situation as it is and something is hidden, unseen or unclear about the treatment.

The Sun will move into Aries and Venus will follow suit, being then combust with negative reception from the Sun and in detriment indicating the things will likely get worse for her pancreas.

Given her knowledge of the illness and the chart testimonies she suspects she has been misdiagnosed and is receiving the wrong treatment. She thinks she may be diabetic type 1 instead.

She wonders if the doctor misdiagnosed her and posed it as a secondary question. A look at Jupiter answers it: very likely. The fact that the doctor did not stress dietary adjustments adds insult to the injury. Just pop the pills and keep eating whatever you like!

So she continues her research and goes ahead and orders further lab tests on her own. She orders the HA1C test which her doctor should have ordered in the first place had he not been negligent or ignorant, or both.

The test came back showing an HA1C level of 11.5. She is diabetic type 1 (late onset). A totally different story. The correct treatment is injectable insulin and, for those who desire to save whatever insulin producing capacity is still left in the pancreas and/or minimize the damage, a diet and lifestyle overhaul are required.

NOTE: she could have insulin resistance as well, making her diabetic type 1.5. That is yet another story. However the point here is that she is not strictly type 2 as she was first diagnosed and must be treated for type 1.

The later the planet signifying the cause of ilness is in the Zodiac the less the mode matters. Venus in Pisces needs all the attention we can give it.

The notion of late Zodiac illnesses being “un-curable” was more true in the 17th century. With modern technology, many things can be “repaired” or “patched up” which were not possible then. Now we have insulin treatments, the illness is not “cured”, but prolongs life and improves its quality significantly.

In the case above she did get worse, within the context of diabetes type 1. Before her pancreas produced some insulin, now it no longer does, and she is entirely dependent on insulin treatment. The combustion showed exactly that process taking place.

She is very serious about her diet and lifestyle, which means that she needs less insulin than usual diabetics do. And her life quality is better due largely to that.

Would you like to learn and practice the subjects discussed in this article? Here are some of the courses offered at the Academy.

A course for experienced horary astrologers who wish to deepen their understanding of the psyche and the root of unnecessary suffering. Learn to answer questions on emotional and mental matters, humoral diagnosis, treatment, practitioners, spirituality, and metaphysical experiences.

Learn horary, natal, and decumbiture techniques. Thoroughly practice diagnosing the proportion of humors in any organism and learn how to take appropriate healing measures.

View Syllabus
PrevWhy is a treatment shown by house 10?
Malefic or Benefic?Next