Will there be a major ebola epidemic in the USA?

The querent is American and asks whether there will be a major ebola epidemic in the USA, like it is happening in parts of Africa. 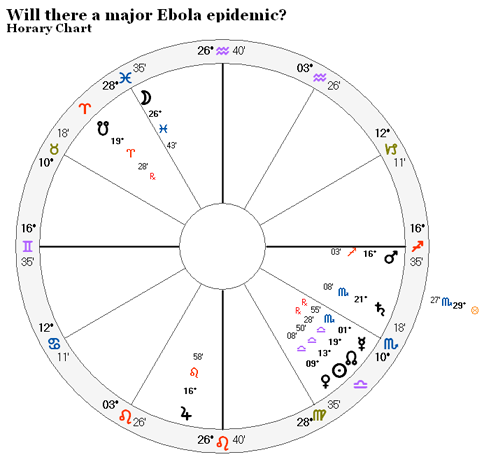 The USA and its people are signified by the ruler of the ascendant, since the querent is American and lives “here”, so “here” is house 1.

First let’s take a look at the virus outbreak, logically, L6; aptly signified by Mars in a Jupiter sign (blood), for a harsh disease which causes severe hemorrhage.

Mars sits on the descendant afflicting the ascendant (here, the USA), as is clearly the case at this time. Angular: highly active against the ascendant. Nothing out of the ordinary for a virus, that’s its business, now that it has landed in the USA.

Jupiter near money, love and health is usually a good thing because it expands those things. Now, what is Jupiter doing to our virus outbreak here? In such a close trine it is indeed expanding the outbreak (not a benefic at all. Consider the context when considering the terms benefic or malefic). Again, this is normal, that is what a virus outbreak does: it grows, expands. Jupiter is describing what is happening now and, since Mars is applying to trine Jupiter, the near future.

So, we have the picture of an expanding outbreak. Will it get out of control and take over entire cities? That is the image the querent had in mind when asking the question.

Let’s look at the past and future of Mercury to answer that.

Mercury (USA) was going about its business when recently it got hit by cases of ebola. This is clearly shown in the chart by Mercury leaving Libra and entering the domain of Mars: Scorpio. The fact that Mercury is mostly peregrine in both Scorpio and Libra is descriptive of the situation in the face of a virus against which there is no vaccine or remedy; basically, the USA, just like the rest of the world, is vulnerable to such virus.

What happens next? Does Mercury enter house 6 and go deeper into Mars’ territory? That would indicate a significant worsening of the situation for the USA and would be in line with an epidemic or severe outbreak.

No, Mercury turns around and leaves the rulership of Mars in a period as short as it took to get into trouble. It literally runs away from Mars. In practical terms that likely means the outbreak will be contained simply by avoiding exposure, rather than by the discovery of a vaccine, for example.

That there is no vaccine or effective treatment is also reflected in the chart by L10, Saturn, being inside house 6 under Mars’ power. That is, ebola pretty much beats any current treatment.

I’d say this outbreak will cause its share of trouble as it spreads for some time. But it will be significantly contained. I see no major epidemic.

Note: the Moon does not tell me anything of significance apart from perhaps the querent being emotionally concerned with the outbreak expansion (Jupiter), that is: concerned with an epidemic, so I left it out of the judgement.

Technical note: like our malefic Jupiter here, Mercury retrograde shows a positive angle to the situation rather than the usual negative conotation that retrogradation carries. Again, all testimonies must be seen against the context.