This is a good learning chart as some of the elements shown have already proven to be accurate. 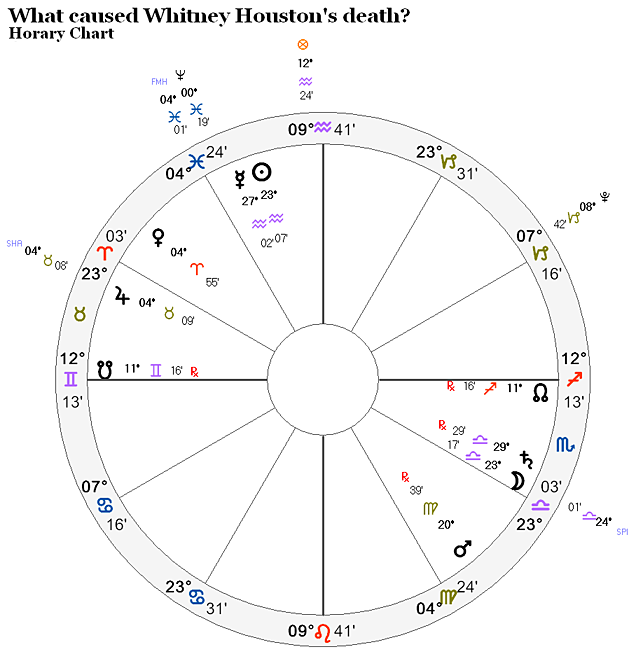 Since the querent has no direct connection to Whitney she is signified by Jupiter, L7.

Jupiter rules both her ascendant and her L5 of her heart. There have been no recent direct aspects between Jupiter and the turned or radical L8, so I will look at Venus, Jupiter’s dispositor and the Moon’s last aspect as entry points to the chart interpretation.

Let’s look at Venus first. Since it disposits Jupiter we know it has power over Whitney. Here we have Venus in her house five and Venus also rules her house 12 of self-undoing. Since Venus is in the beginning of its sign it is worth taking a look to see if any relevant changes in reception with Jupiter happened recently. And indeed we do have a significant change. Venus in Pisces was in mutual reception with Jupiter. That shows a picture of someone who was leading a life with the help of drugs and causing harm to oneself in the process. We know that to be the case. That however changed when Venus entered Aries: the drugs can no longer help her cope.

We know that she was using prescription drugs, which are signified by the ruler of the turned 10th house, the Sun. The Moon, her turned L8, is separating from a trine with the Sun, directly linking her death to prescription drugs. Mercury, possibly her blinded doctor, is separating from a conjunction with the Sun, and both are in her house 12 by antiscion. Mercury, the doctor, opposes Jupiter’s antiscion pointing at the possible fact that he was, unknowingly to her, opposing her health.

Jupiter is peregrine and exalts the Moon, her L8. We may or may not have a suicide here, but we do have an indication that she had been contemplating death or wanting to die for some time already during Jupiter’s journey through Taurus. The Moon right inside her 12th cusp tells us that, consciously or unconsciously, she acted in that direction. Her death and her 12th cusp being on the spiritually happy star Spica give her death a connotation of release or deliverance from suffering.

The Moon’s antiscion being inside her 5th cusp points at her heart as a possible organ involved in her death. But, given the context, we should also look at her house 5 as the house of pleasure. The star Fomalhaut sits on her 5th cusp. The “kingdom in another world” that Fomalhaut is associated with echoes the testimony of her exalting the Moon, her death. Needless to say house 5 of pleasure and house 12 of self-undoing can be naturally connected. We know it certainly was so in Whitney’s case.

They say she possibly took a medication that put her into deep sleep. Whatever she did was in excess, pointed at by the North Node on her ascendant. The medicine possibly interacted with the alcohol in her blood (Jupiter), as she had a hangover from heavy partying (house 5) the night before she died.

When she was found her head was under water. She may have fallen asleep in the tub and drowned. Notice that Saturn signifies her throat and what goes into her throat, her L2. Pluto sits on that cusp showing trouble in that part of her body. Saturn also signifies her lungs and its antiscion is on Neptune near her 5th cusp. Saturn is retrograde showing that it was doing what it was not suppose to do, that is, in the context, take in water. A plausible picture.

Jupiter is also conjunct the star Sharatan, one of the horns of the ram in the constellation of Aries. Sharatan, according to Robson gives bodily injury. Accurate enough here. Psychologically it is connected with “mercy”; interesting to explore if we knew what she was going through in more detail.

As far as I can see she did not die of a particular physical illness. She died of “exaltation of death” and of self-undoing in the form of excessive alcohol and drug use. The Moon and her house 12 and Venus, its ruler, tell us so rather clearly. As for the physical cause I see two options: either she died of her heart stopping due to the drugs-acohol combination. Or that combination put her to sleep and she drowned. We will probably see it in the autopsy when it is released.